A left turn on the family history front

Researching family history can be incredibly frustrating, especially when one tries to find people born before the start of systematic record keeping in the 1850’s.

Just to make it doubly confusing people in my family line at least kept on reusing names, James, David, John, George to name but four, and given that a lot of them were resident in the same area of north east Scotland it can be difficult to sort out who is a direct ancestor and who wasn’t.

So, in order to save myself some work, I sometimes go searching various family history wikis to see what I can find about these common names.

Well yesterday I was searching for James Moncur and I found an entry that stopped me in my tracks:

This James Moncur had clearly married a Maori woman – in fact two separate Maori women and had a number of children, all of whom had Maori names as well as western names.

Now, Pakeha men having children with Maori women was not exactly unknown in the early days of European settlement, but what was interesting was that his relationships appeared to have some legal status, and that the children were probably baptized.

The actual entry is slightly confusing and it’s just possible it has conflated two James Moncurs, but Matilda Juliet turns up on another genealogy website:

A little more digging revealed that James had been born in Stepney in London and had been a master mariner. He appears to have died while at sea in 1845, while master of the Gypsey, sometime after May 1845.

As well as searching Papers Past NZ, I also searched Trove for shipping information and turned up this entry from 1832:

Unfortunately, it doesn’t give the name of the Moncur concerned, but it probably wouldn’t help much – James Snr was now living in Sydney, having been a master mariner for the East India company.

His daughters, Susannah and Sophia had come to Sydney in 1832 to join him, and they established a millinery business: 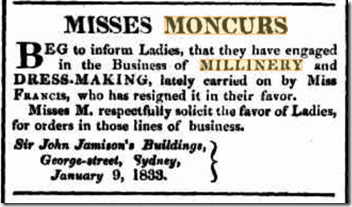 It may be coincidence, but it’s worth noting that one of James Jnr’s daughters was also named Sophia – perhaps named for his sister.

While James Jnr was born in Stepney in London, James Snr was born in Dundee in 1774, suggesting that his father had moved to London at some stage in his life. The Stepney connection is perfectly explicable – in the eighteenth and early nineteenth century Stepney was where the docks and commercial waterfront was, with most ships sailing from there.

Now one of the other members of my family history curiosity cabinet is John Moncur, who was a naval officer during the Napoleonic wars.

I don’t know where John Moncur was born, nor do I know if he had any children, but I do know he died in Greenwich in 1814 at the age of 71, and he was commissioned as a lieutenant in 1790 when he was  roughly 46 years old.

This in itself is a puzzle – lieutenants were usually midshipmen who had passed the lieutenant’s exam at around the age of nineteen, suggesting that John may have had a career before he joined the navy, perhaps as a master mariner.

With a wild leap of supposition, it’s just possible that James Snr might have been one of John’s children – he would have been fifteen or sixteen when John was commissioned and may have moved to London with John’s family …

1 Response to A left turn on the family history front