Female Obstruction in the small ads

Sometimes, we tend to think of the Victorians as quite like us, except a little more buttoned up, and wearing funny clothes.

Yet, in many ways their lives were quite different from ours, one aspect being the absence of reliable and widely available contraception. This of course meant that most young married women were either pregnant or nusing, and that also women tended to die at a younger age than men due to the hazards of childbirth.

And of course the risks continued through a woman’s fertile time, even into her late thirties or early forties. For example, the Edwardian travel writer Beth Ellis  died in childbirth at the age of 38 – an age that was comparitively late to be having children, especially in Edwardian times.

Yet we know people had sex, and not just within a formally sanctioned marital relationship. The Madeleine Smith trial half a century earlier shows that young women did on occasion have sex with their lovers, and Victorian literature is full of stories of governesses having a fling with the master and being cast out, or indeed making off to live in sin with the master, while the wife is locked up in a madhouse on the basis of her unreasonable behaviour.

Court records and parish relief records also record cases where maidservants became pregnant by the groom or the footman, and were dismissed – often meaning that the maidservant’s family slid into destitution as they were partially reliant on her income.

All in all sex was a hazardous business in terms both of a women’s health and her social standing, and there must have been many cases were the woman didn’t want to continue the pregnancy.

Did she have a choice? Well yes, she did.

Unpalatable as it may be to us, she could acquire an abortifacient and abort the fetus.

While not exactly legal, there is good evidence that many women, both married and unmarried, took this route.

But how did they find out about the availability of such medications?

In a word, advertising. Discreet advertising. Sometimes for medications for ‘female complaints’ and sometimes by warnings that such and such a medication may cause a pregnant women to miscarry – nudge nudge.

However, none of the widely available published sources described the situation in Australia, which is interesting, given that from what we know, informal and sometimes impermanent unions were not exactly unknown in the goldfields and in frontier settlements.

So I decided to do some digging in the newspaper archives to see if there was evidenc that such things were being advertised.

As much of the advertising for such products flew under the radar in a cloud of euphemism it was difficult to work out a suitable search strategy, so I decided to settle on a search for one particular mid Victorian euphemism – female obstruction.

While it could refer to other mentrual problems, there’s quite good evidence to show that it was used to refer to pregnancy.

So, I first did a dry run using Welsh Papers online to see what a search for ‘female obstruction’ would turn up:

Which was perhaps not quite what we wanted – this suggests a clinic rather than the use of a medical preparation, but then there was this advert.

The mention of ‘married or single women’ certainly makes it fairly clear what is being advertised here.

So, on to the NLA’s Trove to see if the search works in Australia:

which it certainly seems to do, even though the adverts seem a little more discreet than those found in contemporeaneous Welsh newspapers.

There could be a number of reasons for this – one of which could be that the term was not as common in colonial Australia than in Victorian Wales. The other obviously was that the colonial authorities were more punitive in their approach and it paid vendors to be a little more discreet.

So, I tried a second search – this time for ‘female pills’.

This was a bit more successful: 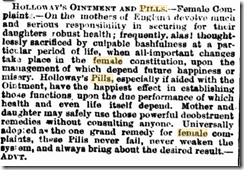 Holloway’s and Beecham’s pills being widely available, Holloway in particular advertising his products widely in the goldfields. In fact Holloway was noticable for his heavy use of advertising. Hollowy’s pills seem to have, like Beecham’s pills, contained aloes, myrrh, ginger and soap, and aloe juice can induce a miscarriage, which is why most probably both Beechm’s and Hollway’s pills worked.

Holloway died a rich man. He and his wife did not have any children and he gave most of his money away.

Among other things, he spent his money founding a mental hospital and women’s college which is today Royal Holloway University in London – given that some of his wealth derived from the use of his pills by women it seems kind of appropriate.