A couple of weeks ago I blogged about the fun I had unravelling the garbled story I had heard in Kuching about the death of Robin Burns Clow.

Firstly, I’ll own up to making one mistake, the Anti Piracy expedition commanded be Henry Keppel and James Brooke was in 1846, not 1848 – Labuan formally became a free port in 1848, but the Dido expedition took place two years earlier and as can be seen from the annexation stone, Labuan became a British possession in 1846 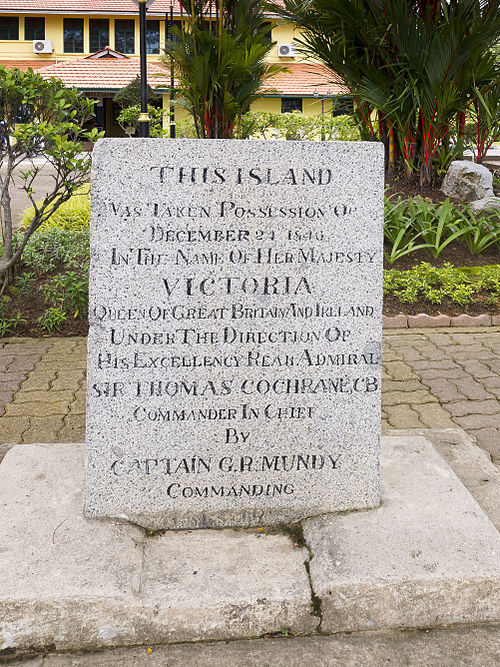 However while I was out by two years, probably due to being unable to read my illegible notes, it doesn’t make a serious difference to the story.

Since writing the post, I’ve also come across a book The Burns Boys by Alistair Renwick, who similarly became intrigued by the story while living in Kuching.

Renwick had the advantage over me of being able to access the archives of the Straits Times newspapers and various other archival sources in both Singapore and Sarawak, and hence research the whole story more deeply.

Broadly, his story is the same as as that which I had been able to piece together by searching nineteenth century newspapers in Trove and Welsh Newspapers Online.

However, the real mystery in the story come when he tried to check out Robert Burns ancestry.

Strangely enough Burns doesn’t appear in any of the census records in Glasgow, where he claimed to be living  before he left for Singapore, suggesting that he was possibly of the wave of migration from the north of Ireland to Scotland in the 1830’s and 40’s.

(Ireland didn’t have a comprehensive Births, Marriages and Deaths registry until 1864, meaning that the only way to research people’s births, marriages, and deaths before then is to plough through the individual parish registers.

As a complicating factor most of the Irish census records before 1926 were either pulped during the first world war or were lost in a fire in the Public Record Office in 1922.

As in all things, gradually more records are coming online, see both Irish Genealogy and the UK National archives advice note on searching Scottish and Irish records for the current state of play.)

Renwick also investigated his brother, who was a dodgy physician with a penchant for amputation in the Oregon territory. Certainly his brother’s qualifications do not appear to check out suggesting that, rather than a qualified physician, he was at best a surgeon’s assistant, with a bit of general medical knowledge.

Importantly a number of the people Burn’s brother dealt with described him as Irish or Scotch-Irish, which is interesting, given that there were many Scots migrants in the area, and they could probably be relied on to know the difference.

So, the Robert Burns who died on the Dolphin was almost certainly not the grandson of Robert Burns.

Newspaper reports of his death describe him as the grandson of the poet, but it’s possible that Robert, like his brother, also reinvented himself and claimed a relationship with the national bard to get on in colonial mercantile society in Singapore, which was dominated at the time by Scots and Scottish owned enterprises…