A few days ago I retweeted a story from the Observer on ambrotypes recovered from the wreck of the SS Central America, a ship carrying gold miners back from California to New York.

There was, of course, no Panama Canal  or rail route across the USA at the time, but there was a railway across the isthmus of Panama.

Rather than risk a long and dangerous voyage round Cape Horn, travellers would sail to Panama and take the train across the isthmus, and then resume their ocean journey, (Incidentally, mail from Britain to Australia and New Zealand would sometimes go this way as well as, prior to the Suez Canal, it was quicker than going via Cape Town.)

The image the Observer chose to illustrate the article with was a particularly arresting one of a young woman dressed as if for a party or a ball, wearing her jewellery 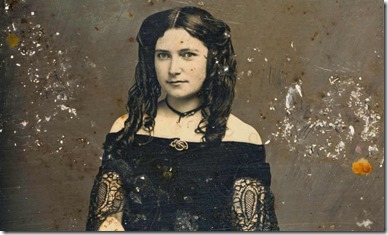 Who she was is unknown. I would guess from her age that she was someone’s sweetheart or intended.

It’s a fascinating image, but how did it survive 150 years or more  on the ocean floor?

The image is an ambrotype, an early photographic process that replaced the daguerreotype in popularity, especially in North America.

You might think it was a positive image, but in fact it’s a negative image on a glass plate.

Once the image was taken, the back of the plate was either coated with a black varnish or backed with black paper. This had the effect of making the image look like a positive in reflected light, as the clear parts of the image showed black, and the rest of the image showed grey to white depending on the darkness of the silver emulsion,

A thin glass plate was then fixed over the image to protect it, and the whole thing mounted in a frame or case, which is why quite often when you look for old images, they are encase in an ornamental frame,

Crucially, and I’m guessing this is what happened here, sometimes the protective glass plate was glued in place over the image using a resin glue around the edges. Given that the image is high quality and clearly produced by a talented photographer, it’s probably the case that the image mounting was done to a similarly high standard.

This means that while the varnish may have flaked off, the case rotted, or the backing paper peeled away, the actual image may have stayed safe and the seal held to keep the water out.

(While the collodion image layer would probably survive a soaking, prolonged exposure would probably cause the image to lift, just as it might cause the backing varnish to flake. For more information on preserving early photographs, the  Conservation Wiki has an excellent guide to the conservation of ambrotypes.)

Former IT professional, previously a digital archiving and repository person, ex research psychologist, blogger, twitterer, and amateur classical medieval and nineteenth century historian ...
View all posts by dgm →
This entry was posted in Uncategorized. Bookmark the permalink.
%d bloggers like this: