Living Pictures in the Albanian style …

Living pictures in the Albanian style.

Now that’s a phrase if ever there was one. It’s from the journal of one of the Rothschild daughters describing a holiday in Scarborough in 1858 and refers to the spectacle of swimmers, presumably male, emerging nude from the surf.

We say ‘presumably male’ because we know from a number of sources, including Francis Kilvert’s diaries, that men not only habitually swam nude until the 1860’s but that many men found the requirement that they wear short bathing pants irksome.

However, there is also a rather nice

Rowlandson aquatint from 1813 of Scarborough beach in which there are two nude figures, clearly female, standing in sea having a chat after their swim.

So we can say that some women swam nude in the Regency period.

At the same time we know from other sources that increasingly women wore long weighted flannel gowns while being dipped in the sea.

Being dipped was part of the cure. Going to the seaside really started in Georgian period as an alternative to going to a spa such as Buxton or Bath and being ‘dipped’ was thought to be good for you. Essentially you were taken out into the sea in a bathing machine in deep water, and assisted by a professional dipper pushed under the waves and pulled up again before you drowned. Wearing a weighted flannel gown would clearly help preserve your modesty under such circumstances.

Men were also dipped, and as they did in spas, they also often wore gowns, although not always – there’s a rather nice pen and ink sketch of

George iii being dipped at Weymouth and despite being a public event surrounded by courtiers and notables, he’s clearly nude.

But being dipped isn’t the same as swimming. Swimming in a weighted flannel gown would have been difficult, and probably most women, if they swam, swam nude. 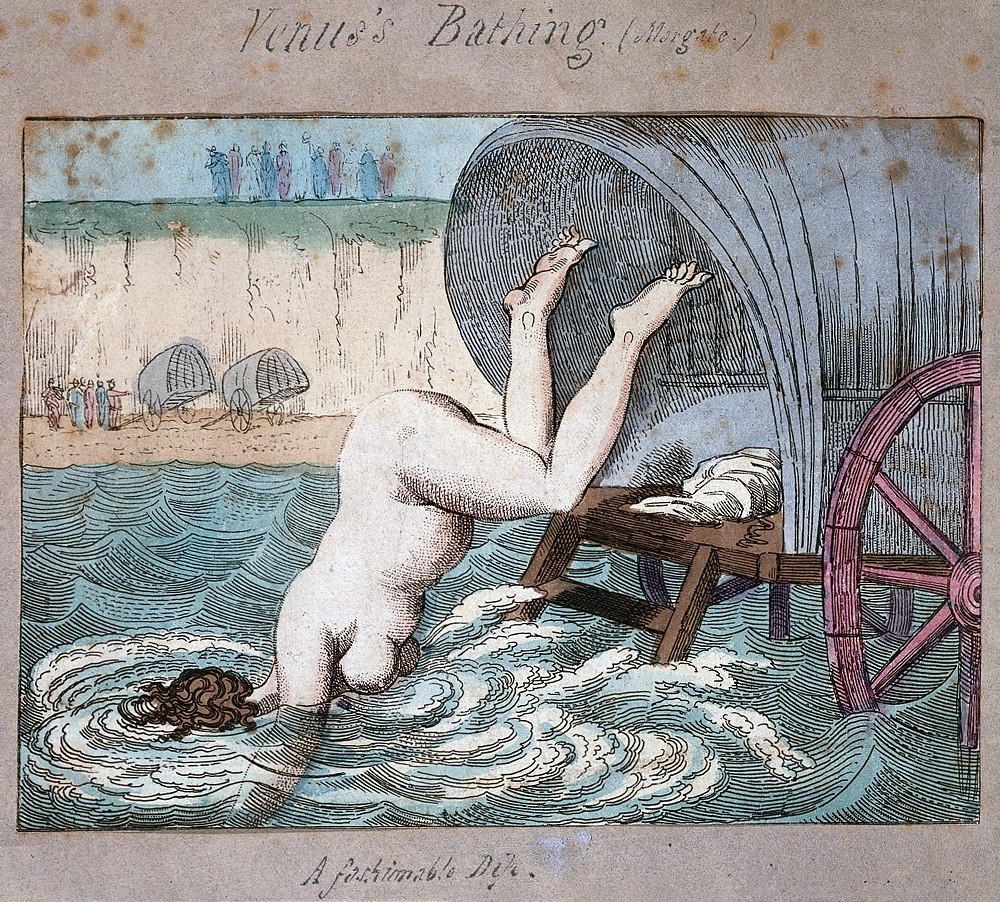 There’s another Rowlandson print that shows how it was done. Bathing machines were equipped with a canvas hood that was pulled down almost to the waves over the exit of the bathing machine and the swimmer launched herself off the steps under the hood almost unseen into the waves, although as Rowlandson’s aquatint suggests, some women didn’t give a damn about modesty.

This would suggest that as it became normal for women to wear all encompassing swimwear women ceased to swim – of course we’re talking about the middle and upper classes here – as the mid Victorian requirement to wear suitably modest clothing probably stopped them being able to swim effectively.

If you’ve ever done an old fashioned lifesaving course where you had to swim 25m fully clothed you’ll appreciate just how much a drag (literally!) that is – imagine trying to do the same in a heavy serge Victorian swimsuit ….

2 Responses to Living Pictures in the Albanian style …