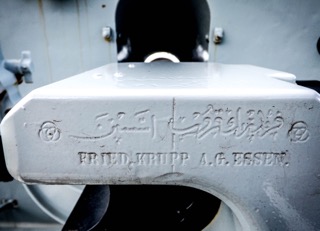 Some time ago  I wrote about the slightly unusual provenance of the Beechworth gun. Well there’s another Krupp 75mm gun close by in Chiltern, and as you can see from the photograph, it was one purchased directly from Krupp by the Ottomans.

This one has been heavily painted so it’s difficult to read the build date stamped on the top of the breech:

but you can just about make out the key data for the serial number and build date:

which matches the record from the Brisbane military museum.

Apart from someone having been a little too enthusiastic with the dove grey paint, the gun looks to be in good condition with some of the wooden parts having been recently replaced. While obscured, the breech markings would probably come up well enough using with brass rubbing techniques, or blowing a little finger print dust over the key area.