Some time ago I read a novel set in Moscow during the Russian civil war which mentioned people drinking carrot tea – something I had not come across before.

Google was not much help – the most I could turn up was a discussion on stackexchange, so I decided on a little experiment today when I was making a carrot salad for lunch:

first of all I grated some carrot quite finely using a carrot grater (you could use the shredded carrot that some supermarkets sell, or grate the carrot with an ordinary box grater, but the result is not quite as fine as you get with my genuine Russian carrot shredder).

I then took some of the shredded carrot (which was quite wet – carrots hold a lot of moisture) and stuck it in the oven at 130C for round about three quarters of an hour. 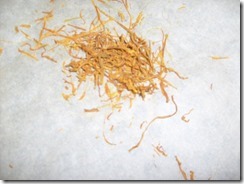 Once it had cooled, I put it in a teapot and poured hot water on it, producing an orange coloured brew slightly reminiscent of a mild assam tea:

It had a slightly earthy after taste and was not at all unpleasant.

Personally, I didn’t find it wonderful enough to want to repeat the experience, but it was perfectly drinkable.

If you do a google search for “морковь чай” – literally carroty tea – you’ll turn up a number of Russian recipes, including this one, which shows I was not too far off. Interestingly there are other variants, including carrot top tea, carrot top tea with shredded carrot, carrot tea with blackcurrant leaf, all of which are touted as being good old peasant remedies for hypertension and urinary health.

I’ve also come across some literary references to people adding dried currants to carrot tea, but that’s an experiment for another day …