This week saw the hundredth anniversary of women getting the vote in the UK (and Ireland which in 1918 was not yet a separate polity). It was at best a partial victory in that the vote was restricted to women over 30 who met a property qualification, but it was a victory of sorts.

I’ve been retweeting a series of articles from the University of St Andrews that give a taste of just how acrimonious the struggle was and how women were forced into direct action to make their point.

Another interesting aspect of the struggle is that a number of the key players were not born in the UK. I’ve already mentioned the wonderful Muriel Matters who among other coups de theatre, hired a dirigible with the intent of disrupting the opening of Parliament by dropping pro women’s suffrage leaflets over the procession.

But I digress, I’d like to introduce you to Sophia Duleep Singh, daughter of the last Maharajah of the Sikh Empire, who after being deposed by the British, was kept in a gilded cage, at first in Perthshire, and later in Norfolk, and forever forbidden to return to India. (I’ve mentioned Duleep Singh before in connection with Sam Baker and a hunting trip in the wilds of Ottoman Europe where Sam ‘acquired’ the woman later to be his wife from an Ottoman slave market. According to Richard Hall’s account of Sam and Flora’s Nile expedition, Duleep Singh had acquired himself a mistress in Vienna and might have been less interested in hunting than he might otherwise have been.)

Strangely, Queen Victoria was fond of Duleep Singh and his exiled family and was Sophia’s godmother, as well as granting her a grace and favour apartment in Hampton Court. 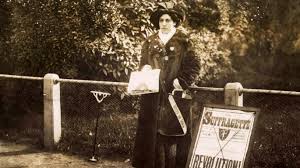 Sophia was allowed to travel to India after her father’s death, and was radicalised by the experience, meeting many anti-British Indian revolutionaries. On her return she joined the Women’s Social and Political Union, selling their newspaper outside of Hampton Court much to the annoyance of George V.

Sophia was more radical than that, supporting the use of bombs to bring about women’s suffrage. During the first world war she worked in a hospital caring for Indian soldiers wounded on the western front, and camapigning always for better treatment for Indian soldiers.

After the war she continued to campaign for women’s suffrage both in Britain and in India, and was true radical all her life …