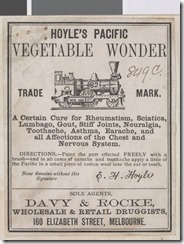 Last week, while I was working on the Dow’s Pharmacy Documentation Project we had a query from a lady researching her family history as to whether we had any bottles of Hoyle’s Pacific Vegetable Wonder

Unfortunately we didn’t, nor could I find an example on the Collections Victoria website. I even did a quick check of a shelf of undocumented bottles, and while most of them are from roughly the right period, most were for Wood’s Great Peppermint Cure, an alternative to Hayman’s Balsam of Horehound.

However I though I’d do a little digging, not the least because the product was distributed by Davy and Rocke, a partnership between Herbert Rocke and Henry Davy.

Herbert Rocke,who after his partnership with Davy dissolved in 1877, went on to partner with Henry Tompsitt to set up a wholesale druggist business, and an early example of electronic commerce with Tompsitt sourcing supplies in England and Rocke ordering material by telegraph from Melbourne.

Davy on the other hand went on to partner with George Mansfield to set up a patent medicine business, both importing and distributing brands from overseas, and making up, and selling their own.

However a google seach for Hoyles Pacific Vegetable Wonder tuned up very few leads. Some digitised newspaper articles on Trove, such as one from the Launceston Weekly Examiner on the product being used to treat Chinese goldminers infected with leprosy, some newspaper advertising, like this from the Herald in Melbourne, and a research paper from the ANU’s digital repository on the incidence of leprosy in Chinese migrants in the nineteenth century, and a reference on the Chinese History museum website to a photograph of Chinese lepers being treated with Hoyle’s mixture, but unfortunately the photograph had been indexed, but was not online.

Enough to establish that the product was around in the mid-1870’s and dropped out of sight thereafter, possibly because it didn’t live up to the hype, or was outcompeted in the market place by competing products, such as Hall’s vegetable pain conqueror. The fact that Davy and Rocke dissolved their partnership in 1877, around the time that Hoyle was marketing his product probably didn’t help.

Certainly, a quick QueryPic search shows the product was only really mentioned around 1877:

But that can’t be the whole story. Hall’s Vegetable Pain Conqueror, doesn’t do any better in terms of mentions:

suggesting that he may have suffered competition from other, local, brands.

Incidentally, Woods great Peppermint Cure shows a wider spread, suggesting that it held its own in the marketplace

So, what does this all mean?

Firstly, poorer people, and migrants for whom English was not their first language, were possibly more reliant on patent medicines than middle class people who could afford to go to a doctor, and pay for formulations to be made up.

It’s also likely that people who were poorer were less likely to buy and read a newspaper on a regular basis and so may not have been a target for newspaper advertising. This almost certainly the case with Chinese lepers in 1870’s Australia, and the advertising was more likely to be aimed at the management of leper hospitals, who would probably be more likely to read newspapers than the inmates.

Hayman’s Balsam of Horehound represents an early use of advertising that was copied by some other manufacturers. Neither Hoyle’s or Hall’s mixtures seem to have gone in for extensive press advertising despite Hall’s claiming on the bottle wrappers to bring relief to an amazingly wide range of ailments

One suspects that Laudunum may have been one of the ingredients, which certainly would have produced relief from pain.

And of course, both Hoyle’s and Hall’s mixtures may simply have fallen out of favour as they were found not to work long term …