An 1847 usage of nitrous oxide in Bristol?

Well not quite, but following on from my recent post about how , round about 1870, nitrous oxide became the anaesthetic of choice for dentists in New Zealand and Australia, I decided to see how much earlier the adoption was in Wales by searching Welsh Papers online. 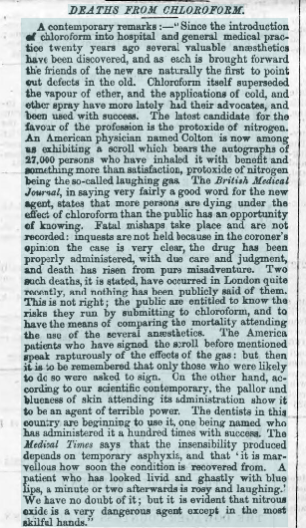 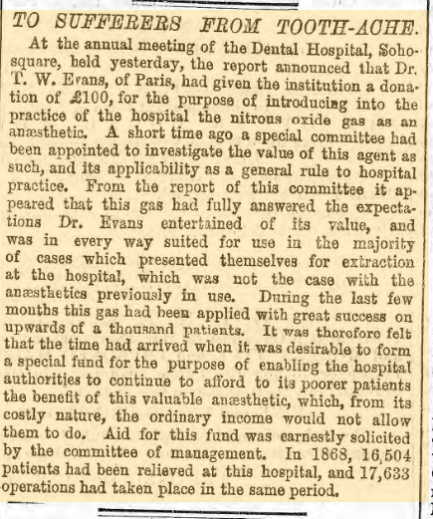 Plus the usual advertising from the early 1870s 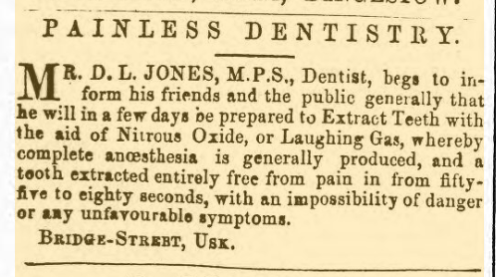 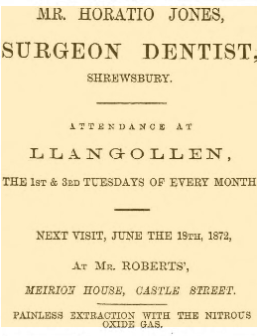 All much as you would expect.

Which is rather interesting given that Horace Wells only first demonstrated the use  of nitrous oxide in December 1844 and his second demonstration was not at all successful, meaning that nitrous oxide was not widely adopted as an anaesthetic.

However the search was still on for a general anaesthetic to ease the trauma of surgery.

It was only after Wells’ former business partner William Morton demonstrated the use of ether in September 1846, that the use of ether as an anaesthetic became widely accepted, and its use in surgery only publicised in November 1846, appearing in the UK in the Lancet of 02 January 1847, one day after the date of William Herapath’s letter.

(Herapath’s letter was originally sent to the Times and is republished in numerous publications).

At the same time there are a slew of reports in English Welsh and Scots newspapers from early 1847 of surgeons trying ether on patients, and administering it from a bag similar to that used for nitrous oxide. From the reports there seems to have been a general awareness of the potential of nitrous oxide as an anaesthetic, though no one seems to report its use in surgery. (Using the State Library of Victoria’s online search of the British Library newspaper database for nitrous oxide brings up a number of articles on the use of ether, many of which also mention nitrous oxide.)

Exactly which William Herapath wrote the letter is open to doubt – William Herapath was a well known chemist in Bristol and gave a series of lectures on Nitrous Oxide in Bristol in 1836 – his son, usually known as William Bird Herapath to avoid confusion, is usually known as a toxicologist today through his work identifying cases of arsenic poisoning, but also worked as a surgeon in Queen Elizabeth’s hospital in Bristol – it is of course possible that both Herapaths collaborated in the use of Nitrous Oxide …