Petropavlovsk in the Crimean War

The Crimean War has been referred to as the first modern war, by which people usually mean that there was something very like modern trench warfare during the siege of Sebastapol, few large set piece battles with the exception of Alma and Inkerman in the early stages of the war, and of course the presence of newspaper reporters, who made use of that newest invention, the telegraph, to send home reports, often less than flattering to the British military establishment from the battlefront.

However, what’s often not appreciated is that this was not just a conflict localised to the Crimean peninsula, but involved naval actions in the Baltic sea and an attack on the Russian naval base at what was then Petropavlovsk, and is now called Petropavlovsk-Kamchatskiy (Петропавловск-Камчатский) in the Russian far east.

There’s quite a good account of the attack in Wikipedia, so I won’t repeat the details here, but essentially British and French naval squadrons in the Pacific sought to interrupt trade between California and the Russian Far East by attacking Russian ships, just a few years later, the Russian navy was to support the Union navy during the American civil war in hunting down Confederate commerce raiders trying to disrupt the trade between California and Russian Far East – remember that at this time Alaska was still a Russian province and there had even been  a Russian fort in Hawaii.

While the Hawaiian fort had been abandoned by this stage, the Pacific was of great military interest to Russia, which is why  a Crimean war cannon was sent to Cooktown to defend the town from possible Russian invasion, and also why, for one, Port Fairy on Victoria’s south coast sports an impressive nineteenth century gun battery 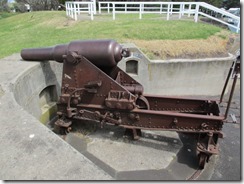 And the war had other effects – it’s been suggested that the Crimean war curtailed organised mass emigration from the Highlands of Scotland to Australia.

So, you could guess that the attack on Petropavlovsk would have been of great interest to Australian (and New Zealand) newspapers of the time, and you would think that it would certainly show up in a search of digitised newspapers in Trove.

There’s only one problem, It doesn’t. Using QueryPic, it’s simple to show that there was a great interest in the Crimean war:

Search for Petropavlovsk, and you really only find references to the loss of the  battleship Petropavlovsk in 1904 during the Russo Japanese war.

Nowadays, there’s pretty much a set of standard rules about how to transcribe  Cyrillic to Latin script. Back in the nineteenth century, the rules were a bit more vague, and sometimes they followed nineteenth century German transcription rules, which is why sometimes you see Chaikovsky written as Tchaikowski  and Chekhov as Tchekhov (or Tchekhoff) in old books.

So my first guess was a transcription problem, so I want looking for websites that included contemporary or near contemporary accounts of the battle.

In this Russian example we can see that Petropavlovsk is spelled in Russian exactly as we would expect, and that the post Revolution spelling reforms have had no impact on the name.

And in this English map of about the same date

the town’s name is given as Petropavlofsk.

Well, that’s believable, the way the stress falls on the ‘o’ – pyetrO-pavlofsk – means the final ‘v’ would be pronounced softly, and could well have sounded like an ‘f’ to a nineteenth century ear, just as a lot of Russian surnames which end in ‘ov’ (ов) are transcribed as ending in ‘off’ in nineteenth century transcriptions – closer to the sound if not the way it’s spelled.

Only one problem. That doesn’t show up either in QueryPic.

In fact it was only by searching Trove for the names of the ships involved in the action did I discover what the British called the town: Petropaulowski or even Petro-Paulowski – a transcription that looks almost Polish, but there it is when you search QueryPic

Perhaps because it was a joint Anglo-French operation there was an officer of Polish heritage among the French  naval officers who could speak some Russian – I’m waving my hands here – and his transliteration got into the official reports of the time. I don’t know, I’m guessing, but it’s odd given that a near contemporary English language map gives it as more reasonable  Petropavlofsk.

But when you do search Trove for Petropaulowski, you notice something else interesting about the reports – they almost all come via Californian newspapers, rather than, as is the case with reports from the Crimea itself,  from English newspapers such as the Times.

Just as we can see with the prevalence of American condiment bottles in Norfolk Island from the 1850’s, do we see that already trade across the Pacific between Australia and California  was already well established in the 1850’s …

1 Response to Petropavlovsk in the Crimean War