As I’m sure you are all well aware, I’ve been working as a volunteer documenting the contents of Dow’s Pharmacy for the National Trust.

A few months ago, I came across a shoe box containing some boxes of old spectacle frames and spectacle lenses, making it clear that one of the Dow’s pharmacists had doubled up as a oculist.

Which of course makes perfect sense. The pharmacist was of course a trained professional, used to measuring and working with instruments, and given the essentially iterative nature of sight tests would have been able to make up wireframe spectacles to suit from his stock of lenses.

However, until I came across the work of Gemma Almond  yesterday on the take up of spectacles in the late nineteenth century 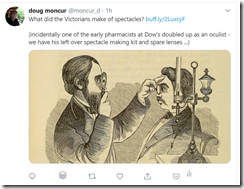 did it click how much of a nineteenth century phenomenon this was.

Increased literacy, increased access to print material (and nineteenth century newspapers did use pretty small fonts) and of course poor indoor lighting probably meant that more people felt the need for reading glasses, even in what was a rural agricultural community by the 1890’s, the gold having run out a few years previously.

So, just as we see with dentistry, the local pharmacist provided access to optical services. And I would guess, just like dentistry, if you needed more than an eye test and a set of reading glasses, it would mean a trip to the nearest town to see an opthalmologist.