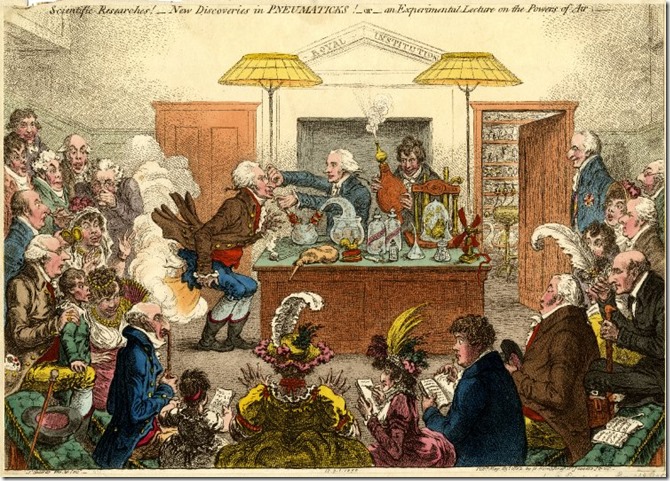 Humphry Davy, the noted chemist, and technology evangelist (satirized by Rowlandson above) was a friend of William Godwin, and was also known for his experiments with electricity, including building a truly ginormous voltaic pile around 1806.

Remarkably, Davy was also friends with both Robert Southey and Simon Taylor Coleridge through Davy’s work with nitrous oxide, or laughing gas. Davy, as well as conducting scientific work on its properties would also invite friends round for a sniff and then ask them what they experienced, something vaguely reminiscent of the twentieth century experiments with psychedelic drugs.

Mary must have heard talk of his experiments and demonstrations and may even have seen some of them, including perhaps the jumping frogs leg experiment pioneered by Galvani.

What’s interesting and less well known is that Shelley was also fascinated by galvinism and had his own voltaic pile in his rooms at Oxford.

Whether Davy ever met Shelley and Mary together is unknown, but he certainly knew of them and perhaps a little of their scandalous lives.

It would seem unlikely if they didn’t cross paths, as Davy was a regular visitor to northern Italy and what is now Slovenia, as evidenced by this plaque on a house in Podkoren on the Sava river that I was surprised to come across when we were on holiday in 2015 …

(There’s a story about this plaque: It was originally put up in the 1890’s and the inscription was in German as Podkoren – or Wurzen as was – was part of the German speaking part of Austria Hungary. Come the end of the first world war and the dissolution of Austria Hungary, Podkoren ended up in Yugoslavia. At some point in the 1920’s, someone took down the original plaque, flipped it over, and recarved the inscription in Slovenian … )