The precariat of the nineteenth century … 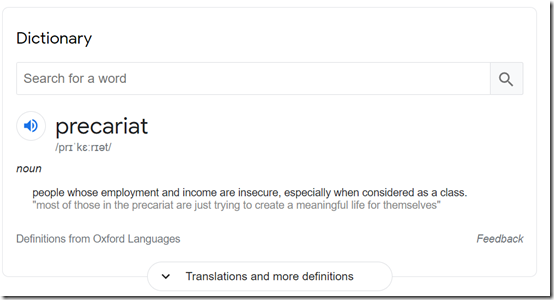 Today, we often talk about the precariat.

However, there’s also a subtle shift underway in meaning – rather than simply gig workers such as Uber drivers and Deliveroo riders – increasingly the term precariat is applied to people in formerly solidly middle class jobs such as university researchers, teaching adjuncts, paralegal staffers, relief teachers, contract IT workers and so on and so on. People who would once have had a secure job but are now on endless rolling low paid contracts.

This has been ascribed to many reasons, among them supply and demand – too many law and IT graduates for example, but the effect is that you end up with a class of low paid skilled people who live from paycheck to paycheck, and never manage to build wealth and acquire the trappings of middle class life. Often, this is described as the hollowing out of the middle classes.

Of course, there have always been middle class occupations that have been precarious – music teachers are one example and there are doubtless others.

What we forget is that the solid respectable financially secure middle class has only really been with us since the latter half of the nineteenth century with the growth of recognised professions.

Darwin, for example, had the money to become a gentleman naturalist. Alfred Russell Wallace did not, and had to earn his living finding interesting insects and birds to stuff, kill, and sell to rich collectors.

And of course, the first half of the nineteenth century is marked by middle class people living in straitened circumstances. Patrick Brontë, who was a self made man struggled throughout his life with an ecclesiastical living that paid almost, but not quite enough, and of course that income would evaporate with his death, which is why his son, who tried and failed to be a professional portrait painter, became a railway official, and why his daughters had to seek work as governesses and schoolteachers to support themselves, work that was often poorly paid, but which was sufficiently genteel to allow them to maintain some social cachet.

And with no marriage portion to speak of, life for the Brontë sisters would have been hard, with an income just enough to keep themselves, and the fear of losing their position. Probably the best they could hope for was marriage to someone a little more financially secure than themselves.

This is of course reflected in the literature of the times with governesses being seduced by the master and then cast aside once they became pregnant, or murdered by suspicious wives. Obviously some escaped the poverty trap one way or another – one example who broke the mould was Becky Sharp in Vanity Fair, but even she came to a bad end.

And hence the obsession with property and wealth from novels of Jane Austen by way of the Brontës and Dickens to Wilkie Collins half a century later.

Wealth and property was important, because they brought security. An army commission, for a man, might bring an income, but for a junior officer was often less than required.

For someone with a junior position in the public service the situation was just as bad – as outlined for example Trollope’s The Three Clerks, and possibly drawing on his own experience as a junior post office official. Barely enough to live on, not enough to marry, or even to aspire to a home of his own.

And even in households with property this was often the fate of younger sons and daughters, when the wealth of the family was not enough to be sensibly subdivided. The old saw about younger sons ‘one for the navy, one for the army, one for the church’ was uncomfortably true.

And in the case of the clergy – and in this case we really mean the Anglican clergy in England – we can see the poverty of genteel life – a curacy and then perhaps a poor living, and then maybe a slightly more prosperous one, always trying to keep up appearances but in reality desperately poor and threadbare, scrimping and saving …