Following my playing with QueryPic and the Lincoln assasination I thought I’d have a quick experiment to see how the Proudlock murder case was reported.

I’d originally thought about a ‘compare and contrast’ with Welsh Papers online but their corpus ends in 1910 and the murder trial took place in 1911, so that kind of died a death.

However playing with QueryPic gives a nice tight peak in 1911:

and in fact there are slightly under 170 mentions, for example this report from the SMH.

The tightness and height of the peak shows that clearly the trial was a major sensation.

The other thing it shows is how quickly news was spread – searching the London Times archive gives five equally tightly grouped results: 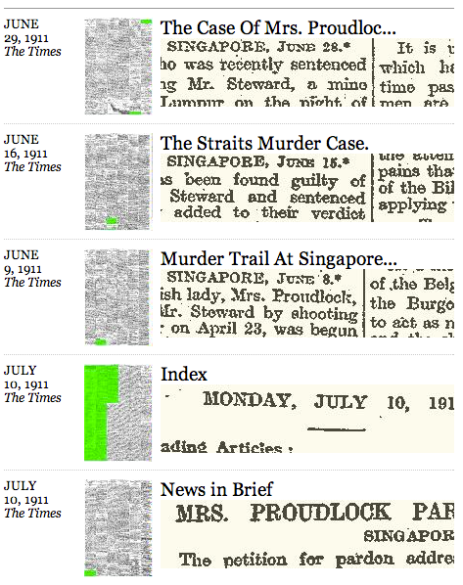 in other words, news was now spread as quickly to Australia as it was to England. Singapore of course lay on the major telegraph route between the UK and Australia, so this is hardly surprising but quite a nice little demonstration of the speed of the spread of the news in both directions ….