Indirectly, it was Peter Kurvita’s fault.

For those of you who don’t know, Peter Kuruvita is a TV chef who presented a cooking show about Sri Lanka on SBS. We’d been stunned by the beauty of the place and put Sri Lanka on our bucket list.

Sri Lanka had been on our radar before. Long ago when we lived in England J had got taking to someone on a train who lived tere and extolled its beauty and culture, and we’d thought about it then, but did nothing.

This time we were casting about for somewhere to go for some serious decompression. I’d just finished a set of interlinked projects that had consumed three years of my life. We’d previously thought about Myanmar and riding the Trans Siberian as options.

Unfortunately we didn’t have enough time to do the Trans Siberian justice, and the time we had was slap bang in the middle of the monsoon.

Sri Lanka effectively has two monsoons, one on the west side which is comes the same time as in India and Thailand, and one on the east side which doesn’t. This meant that we could escape the worst of the monsoon by a bit of careful planning.

We flew to Colombo via Singapore, leaving a chilly Canberra to catch a mid afternoon flight to Singapore, and a tight connection to an onward flight to Colombo arriving on a wet sticky monsoonal night.

There is no public transport worth a damn from the airport so we hired a minicab to take us to our hotel. Along the way the driver asked us what we were doing, how long we were there, and when we said we were going to Galle the day after next, promptly offered to drive us there for what turned out to be a competitive price.

The hotel was an old colonial house with a modern extension in keeping with the colonial architecture, built round a fishpond and with a wonderful roofed open air dining room where one could sit and watch the rain patter down, and for a day that is exactly what we did.

With its tiled floors, colonnades, atrium and fishpond the Wallawwa irresistibly reminded me of illustrations of a high end Roman villa.

Colombo itself is not an attractive city. Busy, noisy, crowded, frenetic traffic, and to be honest, not that much to see. As we had another flight at an ungodly hour back to Singapore at the end of our trip, we’d decided to have a night in Colombo the day before our flight back, so we went straight on to Galle.

Originally we’d had plans to get the train from Colombo to Galle, but that was logistic nightmare involving a cab right into the centre of Colombo to the main railway station, and the ever present possibility of the trains being full, Sri Lankan railways not having an online booking service, so we copped out and had Mr Aruna drive us to Galle for a pretty reasonable Rs8000/- plus Rs400 for the freeway toll (there’s around a 120 Sri Lankan Rupees to the dollar, to make life simple we decided to pretend that a dollar was a hundred Rupees meaning we’d get a pleasant surprise once the bills came in).

The freeway is planned to go all the way to the airport on the north side of the city, and while they are visibly building it, it’s around a year away from completion meaning a two hour drive through to Colombo.

Our driver opted for the most direct route, which took us almost but not quite into the old colonial city centre, passing the Oval, Colombo’s test cricket ground, the government area including the new Parliament building and the memorial to the Civil War, and then out onto the freeway, which amazingly had almost no traffic on it.

Galle is in two parts – Galle fort, the old, rather nice and quietly arty town with old colonial buildings inside the walls of the old Dutch fort, and Galle town which is the modern chaotic scruffy town where the real people live. We’d opted to stay in the Fort at the Fort Printers hotel which was a restoration of a nineteenth century printworks in the heart of the old town.

Galle has been a port for at least two thousand years. The locals will proudly tell you how the Greeks and Romans came here, and how in the nineteenth century, before they built a big harbour at Colombo, ships on their way to Australia and New Zealand used to stop there. While the Fort is really a tourist area now, there is still a large Muslim community in the fort as a legacy of Arab and Somali spice traders in the middle ages.

The fort was a foundation of the Dutch East India company and at least one of the gates has the British crest on one side and the VoC logo on the other.

On the day we drove there the weather was fine, although when we walked up to the walls of the old fort to see the sunset it was starting to blow a bit. However when we went to dinner at a rooftop restaurant where you can sit and look out over the rooftops while listening to the call to prayer from the next door mosque (out of respect the restaurant pretended not to sell beer, but actually did, the waiters asking if you would like ‘something nice’ to drink) it seemed to have settled down to a warm wet gently rainy evening.

We were wrong. What had seemed to be a gentle monsoon evening turned into a major storm overnight with windows banging and rain hammering on the windows and the roof of the hotel.

The power went off some time after midnight and we awoke to the sound of hammering and people outside in the street sweeping up broken roofing tile. The power was still off, which turned out to be more of a problem than you would suppose – it also meant that the hotel’s water pressurisation pump was off meaning that all the taps produced was a thin reluctant dribble, and the toilet took a generation or two to fill.

After a cat’s lick we emerged to find that rain had come in through the roof of the corridor outside, but the kitchen had risen to the occasion and was producing omlettes, toast and black coffee on a couple of gas bottles.

After breakfast the power was still off and we set off for a walk round the town and then off over to the new town where there was electricity to find a working cash machine, which we did, securely guarded by a couple of soldiers armed with what looked like world war two vintage rifles. Various advertising hoardings trees and light poles were down and the soldiers were there to keep order and guard the banks and government buildings.

They weren’t very threatening, in fact one of them guarding Laksala the state tourist store helpfully went and got us a tuk tuk when we emerged into a monsoonal squall.

When we got back to the hotel the power was still off but the hotel had arranged with another hotel who had a backup generator to let us have a shower and get cleaned up. By the time we were done the power was back on and the taps were running.

That evening, by virtue of the fact we were staying in the Galle Fort Hotel, we were invited to an exhibition opening and book launch by a local English expat photographer, (Juliet Coombe). We liked her work but less sure about the glitterati daarling sort of people who appeared out of the woodwork in their designer clothes- we didn’t know there were people like this in Sri Lanka!

Anthropologically it was quite amazing, as all these wealthy expatriates, some of whom looked as if they belonged in the nineteen fifties, and others as if they had just appeared from Chelsea or Kensington. Even though we had our respectable travel clothes on we still felt distinctly underdressed, although we met a number of interesting, and other equally underdressed people who somehow had ended up at the event, including a lady who had just completed a five day bike ride to Jaffna in the north, and an interesting Sri Lankan family from Sydney who were trying to get an aid project to help disabled children in orphanages up and running.

Mirissa was a very relaxed stay in a guest house where we were treated like family, chilled, swam, and discovered the pleasure of fresh cinnamon tea made with cinnamon leaves from the garden, freshly plucked, torn and added to hot water – just as a herbal infusion, not as a spiced tea as we’re used to at home.

On the way to Mirissa from Galle we stopped at a small privately run turtle sanctuary where some people, who seemed genuine, were doing their best to help protect the turtles. Very much a backyard operation, but one that could make a difference.

Mirissa turns out to be known as a prime turtle egg laying site and the people at the sanctuary said that they often had to buy eggs back from fishermen who still went and dug them up.

The next day, when we went swimming in to ocean we were rewarded with the site of a turtle about ten meters off shore – whether it was just there doing turtle things or planning to haul up that night we’ll never know, but never the less it gave us a distinct buzz.

The other cool thing about the journey to Mirissa was that our driver pulled off the main road, bumped over a rail crossing, drove down a side road to another rail crossing, and there was a rock carving of Buddha, and for some reason, a colonial era grave.

The site was being looked after by an old lady who brushed the paths clean and cleaned up any rubbish left behind from pilgrims’ offerings. 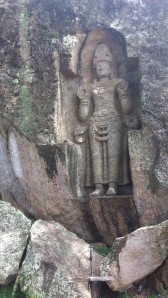 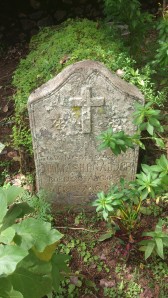 A quietly magical little place that will have to remain a mystery, as I was too entranced by the magic of the place to write down where it was …