It turns out the whole rural oculist thing is more complicated than I thought.

The other complication is that until 1896 anyone could claim to be an optician, meaning that jewellers and watchmakers – both skilled crafts – could also claim to be opticians:

As well as pharmacists 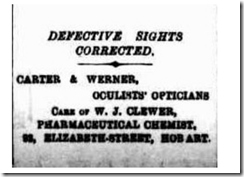 (interestingly, while the pharmacist was doing the testing, the spectacles were being made up by Carter and Werner, a large wholesale optician in Ballarat)

and those who simply claimed to be spectacle makers 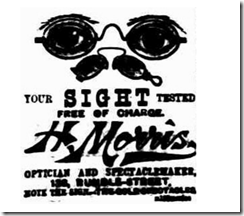 and not just in Australia – a search of Welsh Newspapers online reveals much the same story: 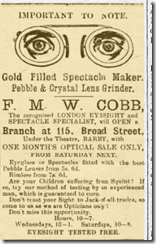 with spectaclemaker being the term used in the days before the medicalisation of sight testing. and the Federation of Spectacle Makers being the recognised trade body:

But basically anyone could claim to be an eye tester.

However, what is also interesting is the case of our Tasmanian pharmacist outsourcing the making of spectacles to a wholesale optician- it meant that the pharmacist need only do the sight test without having to develop any technical skill in spectacle making …

I was in Canberra recently, and while I was there, visited my optometrist, and as one does we had a bit of chitchat while he was running all the various tests.

Now my optometrist is a bit younger than me – say ten years younger – and hails from South Africa. When I mentioned the oculists equipment at the pharmacy he immediately said that used to be quite common and he could remember rural pharmacists doubling up as opticians …