Every year, I send out a Season’s Greetings tweet, usually enlivened by an amusing image I have shamelessly ripped off from somewhere. 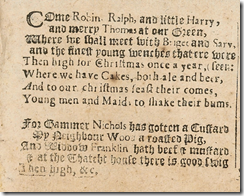 (I’ve removed the long s’s of the original for readability).

Now this is actually quite interesting.

They may have been the same dances as the slow and stately ones but I’m immediately reminded of the contrast between the rather twee Ladies’ Country Dance Society and the mayhem of of a bush dance in a barn in Wales that I once went to that featured all the old country dance favourites but performed at double speed.

I’ll let you guess which was (a) more fun and (b) may well have involved bumshaking.

And of course one also has to mention that indispensable fashion accessory, the bumroll.

Now again most fashion history tends to focus on what the upper classes wore, for the simple reason that that is what we have most evidence for.

However, people being people, I’m sure that seventeenth century maids were as likely to dress up as their twenty first century sisters, except that rather than a push up bra they chose a bumroll, possibly a more modest affair than those worn by high society, but still enough of a roll to accentuate the movement of the hips, and that, coupled with energetic dancing, would almost certainly resulted in a decent amount of bum shaking …

(the ballad the passage comes from is the Shropshire Wakes or Hay for Christmas – if you want to see the original ballad sheets there’s a couple online at the Bodleian, and if you prefer the text in a more modern and readable font there’s quite a nice online transcription that gives a bit of background)